The twelve concrete columns to support the second floor.
Formwork hired and returned after the columns were finished.
The timber used to support the form work was from a house demolition.
The form work came with all bolts nuts and washers needed.
The day before a lot of small cement pieces with wire protruding were made, these were tied to the column steel so as to hold the steel away from the timber form work, they were about two inches square and one inch thick.
The hiring of the form work was paid for after finished with as each day added to the bill, so it is best to leave the form work in place for one night only.
High strength concrete was mixed by hand. All columns were poured on the one day.
The concrete was mixed in a large plastic bath like container and carried in the black plastic buckets.

Setting up.
The workers were confused as to the setting up of the direction that the columns should face on the wall that was not square to the rest of the building.
I had a problem with them wanting to set the columns square with the wall and not square with the building.
This was one example where anything unusual about the job needs to be supervised by you and double checked as the workers know only how to do the job in the usual way.
When they finally put the columns at the angle I wanted, they were not in line with each other.
This out of line columns thing caused quite a problem when it was time to fix the roof beams above the next floor, alterations had to be made or the roof could have finished two inches inside the bottom floor. 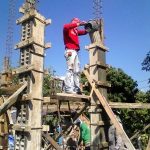 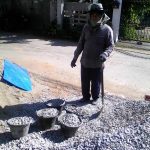 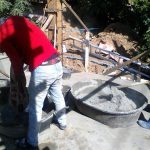 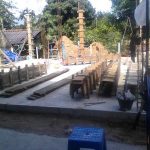 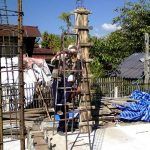 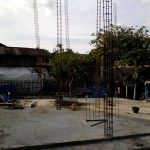 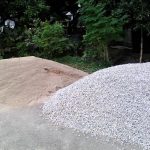