This page under construction.

One day pour for the second floor.

Note – in Thailand the first floor above the ground floor is referred to as the second floor – we are in Thailand. 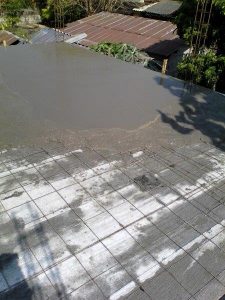 Their were five workers and myself – they all had their own gum boots.
The whole area was poured with the hardest grade of ready mixed concrete which was lifted onto the second floor by a crane truck with a bucket that held about one third of a meter.
The concrete amount was estimated and the last truckload was adjusted for amount, the bit left over was put into the trench for the fence foundations. That was my job.
The area was form worked with the 100 x 50 square section steel tubing which was later used in the roof construction. Some of this steel was welded into place and the welds cut after the concrete floor had dried.
The poured concrete is on top of the 2 inch thick concrete floor planks.
A weldmesh was placed in the poured concrete.
A day before the pour, mounds of hard concrete were placed at about 2 meter centers and with a string line adjusted to the exact height that the concrete floor should finish.
The bathroom floor had been poured with the beams some weeks beforehand and finishes at the same height as the beams, 100 millimeters below the main floor.

100 millimeters difference in floor levels seems a lot but allowances needed to be made for the slope towards the floor drain.
The bathroom floor did not have concrete planks but was poured onto plywood form work and 6 millimeter round steel at 100 millimeter centers was used for rebar.
The plastic drain pipes were in position before the pour.

A brushed finish is applied to the concrete with a straw broom, my intentions were to have smooth concrete on the patios but after all was done I tiled all the patios.
When the floor is poured over the planks, water and cement dribbles through to the lower floor so it is wise to cover or move anything that might be damaged by this slurry.