Cultural Considerations when Building in Thailand.

It is wise to respect the local culture and traditions or you might generate a bad attitude towards yourself and this could make things difficult.

It is much healthier if you are respected by the community and it doesn’t take much to gain that respect.
Thai people are suspicious and have a spiritual relationship with trees and water and possibly things that I do not mention here.
Some people can be grumpy or authoritarian, the same as anywhere I guess. 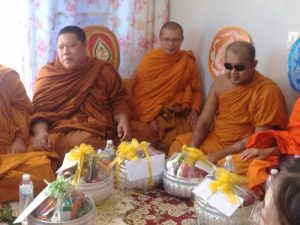 When I filled the land a grumpy neighbor wanted a retaining wall, about half a meter high placed along a boundary.
I didn’t know what type of fence might be the final decision so I placed black plastic sheeting along the boundary and wrapped it from under the filling clay up and over, this stopped the clay from washing through the fencing line during the wet season – he was impressed and happy, the final fence and retaining walls were built later.
After the fill was in place I scattered a thick layer of hay across the area where the rain water was running off, this insured that I didn’t allow a slurry to run onto the road which surely would have became a hazard for motorbikes.
Trees and wells.
If there is trees, a well, a waterway that will be removed or altered, then you need to talk to the local people.
There always seems to be a happy way to solve any problem that might arise but it needs to be done their way if it involves tradition.
I consulted with the locals before I filled a hole that was a disused septic tank. There was no argument but they did want to have a look first.
Ceremonies.
There are ceremonies, two or three of them.
I knew nothing of the Buddhist or cultural traditions and became confused about the first ceremony.
The confusion started when I was told that I must have the first two footings dug out and the steel reinforcement ready by a certain date or the job could not go ahead till a far off date.
The date had to be decided by some person of authority – I don’t know who it was.
The excavator driver was quick to obey, I made up the steel, and everything was ready on time.
I was wanting to just stand up the steel myself and throw a few shovels of concrete around it so they could have their ceremony but this was not how it is done.
Apparently, my way would have destroyed the whole spiritual thing.
A few people were present and the local men stood up the reinforcement for the two piers while the ceremony took place.

Reo ready for the ceremony.

Concrete was delivered and quickly poured into the holes to build the first two footings.
The final result was a bunch of bananas, a piece of clothing and some other things hanging from each of the piers.
A piece of foliage was dropped into each hole and covered with the concrete. 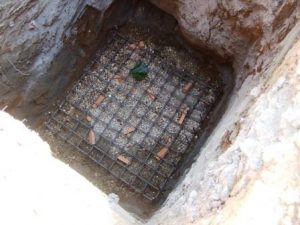 See the foliage in the hole.

These items remained where they were until they needed to be moved up and up and finally into a spot in the ceiling and they remain there today.
The ceremony was very brief with no party and the men wandered off shortly after the steel was upright, I used the electric vibrator to settle the footing concrete into place.
So if you find yourself having this ceremony – just go along with it but do make sure the steel is properly in place.
You might have more time to get things ready if the sacred dates are explained to you beforehand.
We moved into the house as soon as I had the bathroom and a bedroom functional.
There was a small ceremony with just a very few people.
A little shrine was placed on a table and I believe this is the same shrine that the monks will visit during the much larger and final ceremony.
The final ceremony when you move in. Usually with a big party two hundred guests and spread over more than one day.
I’m sure that when you get to this stage you will know more about it than I do.
Fit in for your own good.
It is always best to fit in with the Thai people and their traditions or you will bring hardship upon yourself and find that when you need help nobody wants to help you, or you will pay top price for everything and deliveries will be slow.
There is a lot of gossiping in a Thai village and it soon gets around if you are good, bad, greedy or a fool.
By following the traditional path you gain respect, smiles and gifts of fruit or a helping hand when needed.
Give tips.
Also it is wise to tip the people of minor importance and their boss will remember that you are helping him, with happy workers.
I usually give the delivery boys 20 or 40 baht. A worker who does a few days, and a exceptionally good job, I might give 500 baht.
An older Thai neighbor cleaned the street drain in front of the house, a particular smelly and unpleasant job, I gave him two and a half days wages for his days work, I gave him 1000 baht.
Not to everyone.
No need to say yes to everyone who asks for money, as many will try to trick you – I had a fellow offer to paint the second and third coat on the ceilings for 30 baht a square meter which would have given him about 3 days pay for half a days work after I had bought the paint.
If he had bought the paint it might have been ok but I would never know if the paint was the same quality as the label on the drum.
So do be careful of every trick.
Many times, after me explaining exactly how I wanted something done, the workers would agree but soon go back to doing it there way.
For instance, they seemed to think It was ok to have the rebar touching the form work, or the reinforcing mesh touching the ground when the concrete was poured over it, they had a hook to pull the steel up into the concrete but no one was bothered.
Another time they were carefully drawing a pencil line perfectly square around every concrete block when in fact the blocks could have been simply broken off close to a mark.
Being an Australian, I lost my temper a few times but it worked out okay, the meticulously slow worker did not come back again and we were able to get the block work finished at a reasonable pace.
New year.
Every Chinese new year in Thailand there is much celebration. If you are building during this period you will notice that the workers and the building supply shops become absolutely lazy for about a week before the holiday – just keep it in mind as it seems to be normal annoying practice.
Go to the next page – Hiring Workers in Chiang Mai, Thailand.
Go back to the top.